In 2018, Google announced it had hired Andrew Moore as the head of artificial intelligence (AI) at Google Cloud. He was tasked with leading all AI efforts and taking the cloud company to new frontiers in its efforts to democratize AI technology. The Google press release on the announcement of his hire read: “We believe if we can get every developer in the world using AI in great ways, we can spur innovation that will benefit everyone.”

There is no better champion of this cause than Moore, who was cherry-picked from one of the most prestigious schools in this field—Carnegie Mellon University School of Computer Science. For more than four years, Moore served as Dean of the School of Computer Science at Carnegie Mellon University, bringing his expertise and passion to teaching young minds eager to do good in the world, using science and technology as their foundation. 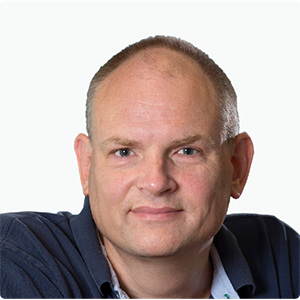 He has said many times, “I am passionate about the impact of technology on the future of society.” That impact has never been more present than it is today, and C2C was eager to talk to him about his story, his goals, and how he sees his legacy unfolding as he evolves in his role at Google Cloud.

Andrew Moore: The Man, The Myth, The Legend

So, let’s level-set here and get a better understanding of who Andrew Moore is. The man goes around saying things like, “I love algorithms and statistics.” Some people may not get that, but I can completely geek out over that statement. One might even say that I’m a Moore groupie!

I asked him to tell me a little about himself, and the first thing he said was, “I have the best job at Google.” The job that he loves so much involves making sure that at the top of the technology stack at Google, he and his team are producing solutions that are useful and advanced for helping the world economy—as well as technology companies—move forward.

Moore isn’t new to Google. He previously worked at the company between 2006 and 2014, when he took a leave of absence to go into academia. “I made that choice because I believe the world needs technologists who are smart about how they play a role in changing things,” he said. “We are in the middle of another industrial revolution, and we need to get this right without causing undue harm for generations to come.” How awesome is that?

He went on to add, “What inspired me to come back to Google was that the vision under the current Google leadership enables us to produce AI that will be useful. And by useful, I mean to actually harness all this technology and get it to work for the better.”

Leading the Call to Change as the World Changes

Having worked in both academia and corporate settings, Moore knows the workplace landscape, including where it’s thriving and where there are shortfalls. He noted that although there are strides being made in regards to diversity representation within universities, the reality is that not everyone has the opportunity to even make it to that point, therefore hindering their ability to be part of the long-term solution.

“We cannot assume that everyone can afford to pay for four-year degrees at places like MIT, Stanford, and Carnegie Mellon,” he said. “Right now, we have the tooling available. We have APIs available for things like computer vision, speech, and language. This means that you don’t need to have a super-fancy education to get to know every aspect of the stack. What you need is easy access to well-designed tools.”

For the past two years, Moore and his team have focused on creating building blocks so that anyone—not just those who have studied at a four-year university—can contribute in building solutions that the world can benefit from.

Right now, the world can benefit from all hands on deck when it comes to contributing to solutions. “To be clear, I am not saying that technology would eliminate all the world’s problems,” he stated. “But the world as I see it is in serious trouble on lots of fronts. We’ve got to look around and ask what tools do we have to help us get through this? Technology helps us get food distributed equitably and efficiently. Technology helps us with prediction and execution of those plans. It can help us save energy and share resources. But [that technology] must be used correctly, and we need to make it available to everyone so that we can come to the best solutions in the right place and at the right time.”

Writing the Music the World Wants to Hear

I asked Moore if he had a greatest hits album, what would it be titled? Without hesitation, he responded, “It would be called, ‘I’m a Computer Scientist.’” He added, “The album would be about the idea that we technologists are going to do our parts and actually help make our planet better for our children and grandchildren.”

Moore noted that he has been very fortunate in his career to have been surrounded by very smart and creative people. “One of the most important things I have learned is how necessary it is to provide people the tools that will allow them to express their creativity,” he said. The great harmonies of our lifetimes occur when different voices and ideas can be tuned in. Moore is working to make that possible across industries and verticals so that the entire world can benefit from the creativity.

On Thursday, Sept. 24, we’re continuing our Rockstar Conversations series with none other than Andrew Moore. You can reserve your spot here. Don't delay—seating is limited.