5 Takeaways from the Rockstar Conversation with Google’s Pali Bhat 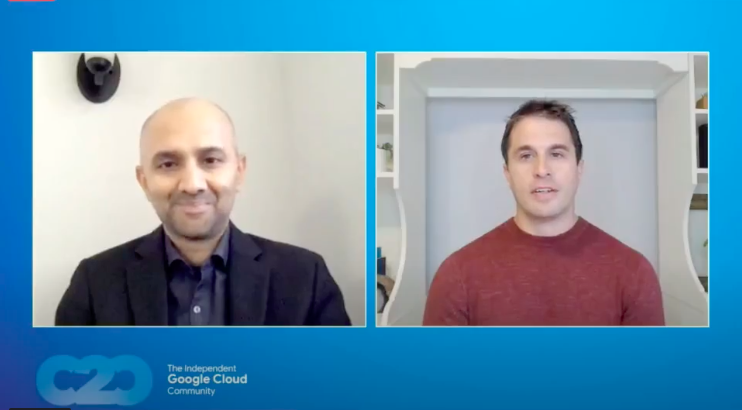 In the fourth installment of its Rockstar Conversations series, C2C welcomed Pali Bhat, VP of product and design at Google, to discuss application modernization and building for the future. Bhat, who has been at Google for more than 10 years, has held various roles but none closer to his heart than his current one. “I love application development!” Bhat said.

Among his responsibilities, Bhat is in charge of Google’s application modernization and developer solutions portfolio. He came ready to discuss all of it—including Anthos, Google Kubernetes Engine (GKE), and various other hot-topic issues—with C2C and its members.

“As you think about your applications, you’ll see they’re the heart of your business and how you serve customers,” Bhat said. “They will become more germane and central to everything that your business does. And so, it's really important to have a platform that empowers all of your technology and application development teams to be proactive and to not have to worry about infrastructure, while still being secure and compliant and meeting the needs of your business.”

Here are five key takeaways from the engaging conversation that took place on the C2C Rockstar stage.

Bhat explained his role at Google as one that needs to determine customer problems and then find ways to solve them. “I listen to what our customers are saying,” he noted. “And then I get to design solutions and bring them to market, and this is something I really enjoy doing.”

In the past year, as the pandemic has made waves across industries and borders, Google has seen an increase in the number of customers looking to accelerate their move to the cloud and to modernize their applications and processes. To give you a sense of Google’s scale, in his keynote during Google Next 2020, Bhat noted that Google has deployed more than 4 million builds and 500 million test cases daily.

“Those numbers are clearly impressive,” Bhat said during the Rockstar Conversation. “But this is an example of how customers are solving problems by taking advantage of the unprecedented scale that Google Cloud offers them.” Bhat offered an example with the GKE platform, which is Google’s secured and managed Kuberbetes service with four-way auto scaling and multi-cluster support. “We have it at three times the scale of any other open-source Kubernetes, and by far the largest scale of any cloud-based Kubernetes service,” he noted. “Today, within each Kubernetes cluster on GKE, we support more than 15,000 nodes. What that means is that customers can analyze all of their data, which they could not do manually, at scale. These are the kinds of solutions we can bring to customers.”

Bhat stressed that a top priority for him and his team at Google Cloud is to empower developers to be able to move faster and focus on the applications they’re building without having to worry about the infrastructure.

“We’ve all seen how development has evolved over the last 30, 40 years,” he said. “We’ve seen an increased focus on more tools and more framework. But with the complexity that has also grown in terms of business requirements, as well as what our customers need from us and from each of the applications we build, we've seen an increased focus on security and compliance as well.” As a result, Google Cloud is focused on providing developers the tools they need for security and compliance without slowing them down.

“Google Cloud brought to the industry through Kubernetes a declarative model for managing how you build applications and how you deploy them,” Bhat said. “And what that ultimately gives you as a developer is the ability to operate at scale.” Another example Bhat highlighted is the work they are doing with how to deal with compliance and policy. “Today, the way you find out if you're in compliance is by doing an audit after the fact,” he said. “We’re going to work on automating all those things that have to do with security and compliance so that developers can simply focus on building their applications.”

As Bhat looks to the future of development, he said it’s about getting to a point where you can have the cloud be your pair programmer. “When the cloud is your pair programmer, you get a really powerful ally to help you go faster and to be able to focus on exactly what your customers need, and not have to worry about all these other things.”

Bhat introduced the Google Cloud Application Modernization Program (Google CAMP) during his keynote address at Google Next 2020. He said, “The path to elite performance is not about implementing a one-size-fits-all app modernization model. Rather, you need to make incremental, continuous improvement based on your organization’s needs. To be successful, you need to start with a deep understanding of where you stand and where to focus so you can maximize the impact of your modernization effort.”

Google CAMP has three main components to help organizations become elite performers, including data-driven baseline assessment and benchmarking; a blueprint for proven, scalable DevSecOps practices; and a modern, yet extensible platform that enables you to build, run, secure, and manage both legacy and new applications.

During the Rockstar Conversation, Bhat said he has heard customers continuously ask for help in their application modernization journeys. “Google CAMP gives every one of our customers the ability to get a tailored application modernization program that meets their business needs. It is designed to help them go faster while also doing it more safely.” He added, “You often hear people say to go fast and break things. Well, our customers actually don’t want to break things. They’re powering some of the most critical and essential services on our planet, and we can help them move fast, safely.”

In a one-on-one discussion I had with Bhat, he told me that Anthos will help in bringing the benefits of the cloud—whether they are on-premise, at the edge, or in the cloud, regardless of which cloud they are on—to all customers.

During the Rockstar Conversation with C2C, he was asked what makes Anthos stand out as a top-tier application platform. He pointed to three distinct things. As mentioned to me, he noted that first and foremost it brings the cloud to customers. “Anthos is really the first solution that actually brings all of the power of cloud in a consumable way to wherever you need it.”

The second thing that separates Anthos is this foundation of open technologies, but with managed services on top. “We've used a portfolio of open solutions such as Kubernetes and others that we've done within Google, and then we’ve built incredible managed services on top that simplify security, policy, governance, and compliance, so that you can actually continue to just focus on your application,” Bhat said.

The third thing that sets Anthos apart from other application platforms is that it is the first hybrid multi-cloud platform that’s bringing value-added services on top. “As an example,” Bhat said, “we recently announced BigQuery Omni, which will bring BigQuery—our data analytics service—to other clouds. Bhat added, “Those three things put together give you the application platform that you need.”

Bhat was asked if application modernization were a 10-episode Netflix series, what episode are we on? Without hesitation, Bhat responded, “episode three!” He explained, “I look at it as customers have gotten started and they really understand that this is important. They've dug into this series, and they now want to get to the finish line. They want to see how it turns out.”

In terms of what’s up next, Bhat cautioned that, “ultimately, application modernization is something that has to be part of what you do as an organization because every technology evolves and gets better over time.” He added, “this can’t just be a 10-episode series, but rather something so popular that it’s going to get renewed, and we’re going to have many seasons.”

As for advice he wanted to share, Bhat said that it is really important to pick the right platform so that you can actually evolve as your customer and business needs evolve. “You also need to pick the right platform so that your teams are investing in the technologies that are going to be durable. And finally, remember that although having the right set of platforms, technologies, and policies are critically important, the most important piece in all of this are your people. Celebrate your technology and application development teams because without the people, none of this would be possible.”